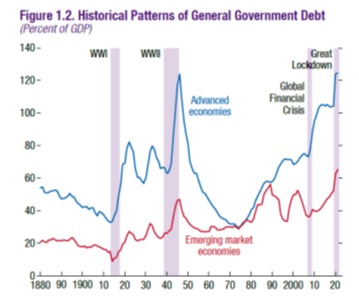 EL PAIS interviews CefES affiliate Silvia Marchesi and other economists about the massive increase in sovereign debt in European countries.

The debt-clock goes back to 1946: The relationship between public liabilities and GDP will exceed its maximum since World War II next year. Dogmas have disappeared, but straightening public finances will be a major challenge.

We should be very concerned. The increase in sovereign debt has added to global debt vulnerabilities that existed before the pandemic, as a consequence of the long-term decline in borrowing costs. The combination of expansionary fiscal measures and the economic contraction will increase the average general government debt to 126 percent of GDP in 2020 (IMF Fiscal Monitor 2020). General government debt is projected to increase close to 30 percentage points of GDP, in Italy, Japan, and Spain, and more than 20 percent of GDP, in the United States. Hence, even in the case of European countries, which cannot individually control their inflation rate, the option of debt restructuring cannot be excluded a priori.